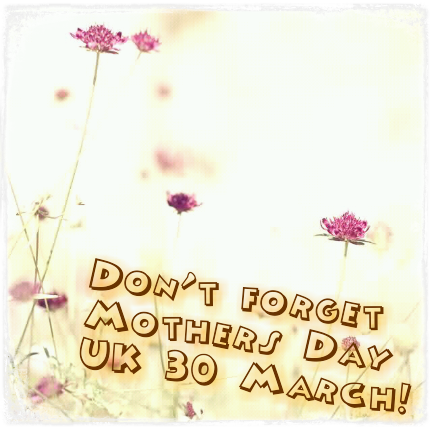 The above image was created using InstaText to post on Moulton Therapies Facebook page. The image was uploaded in a post for the timeline with the following text in the description:

Don’t forget Mothers Day is 30 March. A pampering treatment for your mum from Moulton Therapies could be the perfect gift. We do gift vouchers too.  http://www.moultonterapies.co.uk/ #mothersday #northampton #northamptonshire #moulton #reflexology #holistictherapy

So there is a context for the image – Mothers Day – there is a link to the website for ‘call to action’. The hastags give an extra opportunity for the image to be found. Next I shared the image in 25 groups that are local to the business. At the time of writing (4 hours since posting) the images is recorded as having been seen by 347 people. Being seen doesn’t necessarily mean any major notice has occurred but that is much better than the majority of posts that get seen by 10-30 people. The page at the time of writing has 104 likes. 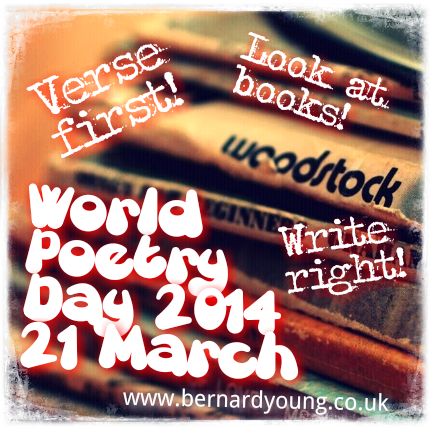 This next image was produced to take advantage of World Poetry Day to promote Bernard Young.  I made two versions, both included his website address in the image as well. This image had the following description text when uploaded to Bernard’s Facebook page.

World Poetry Day is on 21 March each year, but it doesn’t seem to get much attention in the UK as we have our National Poetry Day in October (2nd in 2014). For the rest of the world I blogged some resources here http://bernardyoung.wordpress.com/2014/01/05/world-poetry-day-friday-21-march-2014/

This image was then shared in 25 groups (a mixture of writer and poet groups and teachers groups) and as a result a day later had been seen by 406 people (from a page that has 70 likes).The aim of this was to get more hits on the blog, which it did, this turning out to be one of the most viewed posts. And hits on the blog help get that site higher in the ratings with search engines.

The other World Book Day image had this description:

Bernard Young has been writing poems and ‘songs’ since his early teens. He is a poet and performer who works in schools. He has also published several books of poems for children. His latest book, Outside Looking In, however, is aimed at a more grown up audience.

For over two years, pretty much every day, Bernard Young has taken a digital photograph and written a poem about it. Sometimes the poem comes first and he finds an image to fit it, but mostly the image comes first and that inspires the words. “Outside Looking In” has 61 pages of beautiful images and words about life, relationships, growing old, dreams, loss and love.

The book is available to buy from http://www.lulu.com/shop/bernard-young/outside-looking-in/paperback/product-20369094.html and Amazon and can be viewed online for free at http://issuu.com/karencropper/docs/outside_lookin_in

Some more of Bernard’s poems for adults are here: http://www.scoop.it/t/the-best-of-bernard-young and contact Bernard via his website www.bernardyoung.co.uk #worldpoetryday #poetrybook

This was an experiment to see if any book sales resulted, but also about more general promotion. This was shared in 40 groups for writers, poets, poetry and books. 9 hours later it had been seen by 276 people. There aren’t any analytics on the lulu site, so I can only judge the effectiveness if there are sales.

Uploading an image on to a facebook page with a link in the description, rather than posting just a link, gives more opportunities to share the information within facebook to get more views – even without anyone then sharing the image on their own timelines. It also means everywhere the image is shared, there is a reference back to the facebook page, with the opportunity of picking up more likes for the page. Whereas when a link is shared there is only a reference to where it has come from with a small ‘via’ link.

This site uses Akismet to reduce spam. Learn how your comment data is processed.

This blog is currently inactive while I am doing other things, such as my own art and online courses. My other blog is at wibbi.uk